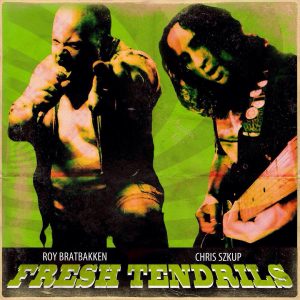 Roy and Chris had discussed this song going all the way back to the making of The Feckers “It’d Be Rude Not To” album from 2013, both sharing a love for the album, and great band, being Soundgarden’s “SuperUnknown” album from 1994.

The guys had kept in touch since that album’s release, and in late 2016 had revisited the idea and started tracking the song, not really sure what the end result may bring, but being driven purely by their feelings for the album, and track in particular. A full “band” version was tracked during this time, with Chris playing guitar tracks, then building the “band” around those, adding bass and bad drums, that were tweaked a little bit, hence the quotation marks around “Drums” in the credits.

Fast forward a few months, all instruments, and Roy’s vocals had all been recorded, and the guys were talking about throwing the track out there when the tragic news of Chris Cornell’s passing broke all around the world. Devastated, the guys didn’t feel it was the right time to put their version of “Tendrils” out there at that time, although Chris did do their song “Spoonman” a bit with his duo partner Dylan Beast at live appearances as a nod to the amazing talent that was Chris Cornell.

Fast forward again to early 2018, and it’s time!!! It felt right to keep this version raw and “demo like” in some ways rather than hiring drummers, mix and mastering engineers etc – Music purely for the fun of it. We hope you enjoy it!!

Listen and / or download for free at the Bandcamp store here.