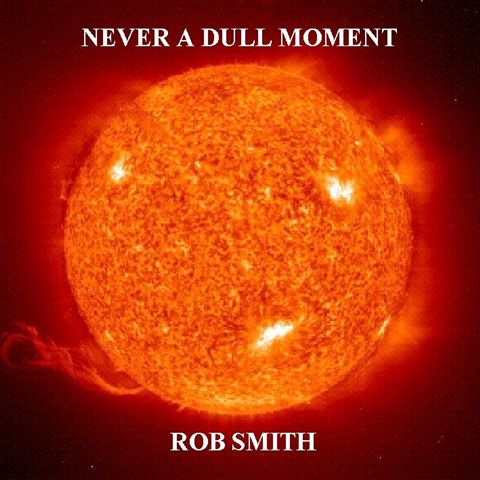 “Cinderella” – I just get a real classic vibe from this song. Real nice opener. Almost something I could see Bryan Adams doing. The other vibe I get is that it would be incredible too see some of this stuff given the live treatment, cause this man has quite a catalog of great songs!!!

“It’s Getting on top of Me” – Again this seems instantly classic to me – kinda like when you think you’ve heard something before but you haven’t. Real pumping stuff. A little bit more attitude than the melodic opener, not that this isn’t melodic either though, but things are turned up half a notch if you will. Love the riffs. Great rocking and rolling,
and the bass lines really jump out and compliment the song bigtime!! Would love to be in the crowd screaming “It’s getting on top of me” for that breakdown bit! Yeah!!

“Never a Dull Moment” – As with all of the songs really, but this chorus is a real goody to my ears – the groove really seems to kick in at the chorus, and the melody is awesome. Some nice guitar interplay between Rob and Rob haha. Always tastiness going on which is what it’s about – totally complimenting the song which to me is the best kinda playing.

“What Happened to my World?” – OK so before any morons get in, yes this song is inspired by and probably loosely based on “Bohemian Rhapsody” by Queen. Credit for even going there – I know with my own music I’d sound like a retard if I tried something like this, but Rob does it extremely convincingly here – the guitars
definitely could be Brian May playing them, and the vocal harmonies could be the three guys overdubbing til the cows come home. The difference of course is that everything
on this track is one guy – Sir Robollio Smith!!! Epic!!!

“Free Spirit” – Gotta relate to the lyric in this one for sure!!! The guitar doodles throughout this wouldn’t be out of place in the most popular of songs of today. Very catchy.

“Freedom to be who I am” – And who you are Rob Smith, is a SHIT HOT acoustic player!!! Damn this song is really something special. Would love to see an album of all stuff like this. Really cool!!!

“You Say You Want to be free” – Some of my comments from “What Happened to my World” could go here – I can’t believe this is all one guy playing and singing this stuff!!! Also check out the song length – quite an effort to have something that long (16 minutes) and keep it interesting. Mr Smith has definitely pulled that off here. This is like
the coolest two or three songs you’ll hear this year but all joined together to equal some epicness!!!! By the way mate, next time people reckon my songs are too long, I’m gonna send them your way haha!!

“On Common Ground” – I get a real spacey kinda vibe from the production on the first part of this song with the clean tones and vocals. REALLY loving the clean guitar solo stuff. I’m always a sucker for a nice clean tone and some tasty licks – which there are plenty of here. The “kit” used for the drum programming seems to really add to this kind of song too. Always nice to hear a vocal cameo from our mate MacGyver (Richard Anderson), a longtime collaborator of Rob’s who contributes lyrics to tracks 3, 5, 7, 8, 9, 10 and 12. Sweet track!

“Tears of the Sun” – Reading from the booklet this song was “inspired by the movie of the same name, and dedicated with deep respect to Bruce Willis and Antoine Faqua. I know Rob is a fan of Boston, which is the kinda vibe I get from the start of the song. Way cool anytime that happens!!! Having not seen the movie “Tears of the Sun”, I can only really imagine that if it were my movie this song was referencing, I’d certainly be happy and then some as it’s obvious that both Richard with his lyrics, and Rob with the music absolutely mean it!! Awesome ending to this song!!!

“Good Memories are made to Last” – Some cool interplay between the different guitar parts as always which Rob is so good at. Totally tasty playing with the leads. When the chorus kicks in, I get an image in my head of the video clip to “This is Love” by George Harrison where the family is all hanging out and enjoying each others company on a beautiful sunny day. I hear a bit that the “happier” songs are harder to write, and in my experience as a writer that can be true too. The guys pull it off awesomely here!!

“Let me Out” – BEAUT little bass runs on the intro and throughout. Love the tone as well!! Quite an eerie twist to the song at about 3.13 for a little bit which was cool, and also reminds me that the programming of the drums as always is fantastic on Rob’s stuff. A section like this with the wrong kinda drum sound would just go nowhere, but this was fantastic!!

“You’re Free” – So glad I got more of the acoustic stuff I was digging so much earlier on in the album with “Freedom to be who I am”!! Apparently this was recorded when it was raining outside according to the vocal intro – certainly not a bad way to spend a rainy day, and it almost looks like a tranquil scene – as long as “rain” doesn’t = pissing down rain haha!!

Beautiful song, and a fantastic close to the album!!!

In summing up, wow what a songwriter!!!! Amongst all the totally musically correct performances in the vocals, guitars, bass, keys etc, I guess it’s a possibility that the fact that the songs are all fantastic may be slightly overlooked!!!! So make no mistake – TOP NOTCH songwriting going on here!!! Hell Yeah Rob!!!

Everyone should buy this album and support independent music – the time and effort, and often money as well, is something that most folks don’t even give a second thought to in this age of music being apparently “free”. I sure hope that will change at some point, even though I’m not optimistic it will.

Contact robertsmith (a) xtra.co.nz or breakfree74 (@) gmail.com for purchasing info!!!!