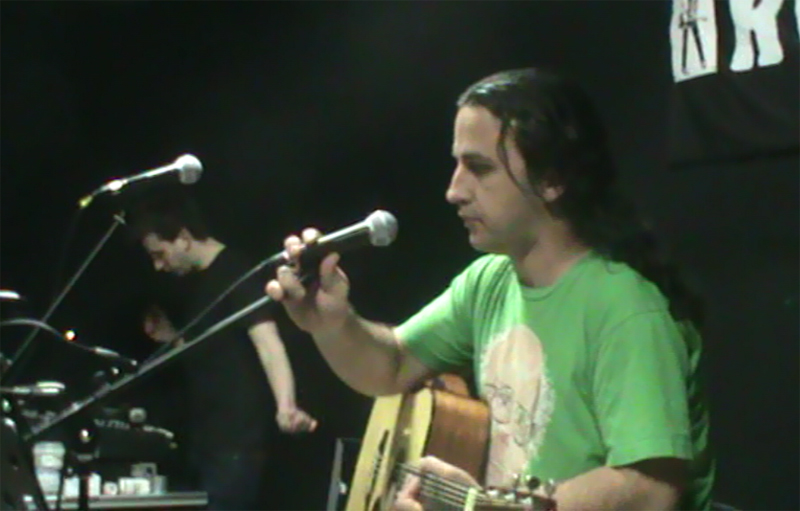 Had a great time last night for my first solo gig in a while at Edwards Place in Reservoir, in Melbourne’s northern suburbs. I do wonder if I jinxed it by making a few too many “Northern Suburbs Jokes” in regards to a lot of crime happening in the area in recent years though as a rock broke the window of the train I rode to get there last night!!! That shit sure wakes you up!!

Setlist was a mixture of solo and Feckers songs, and looked like this:

Here is some video of me singing “Slackers and Wankers” – funny how well this one always goes down as it’s the one with the most swearing in it!!

Irene Slade and I (with possibly a special guest) will be playing  an unplugged 30-40 minute set of tunes from The Feckers “It’d Be Rude Not To” live for the very first time, and we would love you to be there with us!!

We’ll be onstage at 8pm, and will have copies of “It’d Be Rude Not To” and “Pieces of Eternity” available on the night!!

Check out the Facebook Event Page, and also to get a taste of Irene’s amazing vocals, check out The Feckers cover of “Wasted Years” by Iron Maiden!!!

Great fun jamming recently in Melbourne!!! Will be another round of video from this session to come soon!!!

Wow nearly 25% of the year is done and I haven’t even said HAPPY NEW YEAR!!! I have been told I’m a little bit slow haha, but the truth is that I just haven’t had the chance to update!!! Lots been happening on this end, but before I post the progress on everything I’m up to musically right now, I just wanna say that I hope you have a fantastic 2010 and beyond!!! All the best to you and yours, and I appreciate everyone that is along for the ride!!!

2ND ALBUM – Even though I haven’t sold a million of the first one yet, all I know how to do is another one, and we started the drums for it in July 09. Am happy to report that we’ll be doing geetars, bass, and basically as much as possible next week at Red Planet!!!! There’s one song I’m particularly excited about giving the proper treatment to as it’s a 3 songs in one deal that covers a lot of different styles within. Will post on how we go afterwards!!!

FECKERS – We’ve made some real awesome progress on this album, which is the one Richard Anderson and I are putting together with guest singers and players from around the world. At the time of writing we don’t have a title for the album, but knowing that guy, one won’t be far away!!

Anyway, we have drums for 5 tracks, all or most of the music done on 3, vocal tracks for maybe 5 or 6, some keys tracks etc. Considering we weren’t even sure this thing would start when we hoped, to be almost half way into it is a great feeling!!

The songs range from good fun rock n roll to slamming metal and the occasional acoustic ballad as well. Working with all the different talent has been a great experience, and to the folks that might have let us down in the past when trying to get these songs together, we even have a special dedication for you!!!

AND BEYOND – Starting to slowly look at whats gonna follow the 2 albums mentioned above, and have loads of songs for what we have planned. Gonna be another old songwriting partnership hopefully doing some stuff in this time, but it’s early days!!

MORE TO COME – As of ten minutes ago, more cool news rolled in, but unfortunately I can’t tell just yet. But having said that, there’s plenty to come, and it’s gonna rock!!!